Early life
Self portrait
Tamara de Lempicka born into a wealthy and prominent family, her father was a Polish lawyer, her mother, the former Malvina Decler, a Polish socialite. Maria was the middle child with two siblings. She attended boarding school in Lausanne, Switzerland, and spent the winter of 1911 with her grandmother in Italy and the French Riviera, where she was treated to her first taste of the Great Masters of Italian painting. In 1912, her parents divorced and Maria went to live with her wealthy Aunt Stefa in St. Petersberg, Russia. When her mother remarried, she became determined to break away to a life of her own. In 1913, at the age of fifteen, while attending the opera, Maria spotted the man she became determined to marry. She promoted her campaign through her well-connected uncle and in 1916 she married Tadeusz Lempicki in St. Petersburg; a well-known ladies man, gadabout, and lawyer by title, who was tempted by the significant dowry.

In 1917, during the Russian Revolution, Tadeusz was arrested in the dead of night by the Bolsheviks. Maria searched the prisons for him and after several weeks, with the help of the Swedish consul, she secured his release. They traveled to Copenhagen, Denmark then London, England and finally to Paris, France to where Maria's family had also escaped, along with numerous upper-class Russian refugees.

The Sleeping Girl Kizette, c.1933
In Paris, the Lempickas lived for a while from the sale of family jewels. Tadeusz proved unwilling or unable to find suitable work, which added to the domestic strain, and she gave birth to Kizette de Lempicka.

Her distinctive and bold artistic style developed quickly (influenced by what Lhote sometimes referred to as "soft cubism" and by Denis' "synthetic cubism") and epitomized the cool yet sensual side of the Art Deco movement. For her, Picasso "embodied the novelty of destruction". She thought that many of the Impressionists drew badly and employed "dirty" colours. De Lempicka technique would be novel, clean, precise, and elegant.

For her first major show, in Milan, Italy in 1925, under the sponsorship of Count Emmanuele Castelbarco, de Lempicka painted 28 new works in six months. She was soon the most fashionable portrait painter of her generation among the haute bourgeoisie and aristocracy, painting duchesses and grand dukes and socialites. Through her network of friends, she was able to display her paintings in the most elite salons of the era. De Lempicka was criticized and admired for her 'perverse Ingrism', referring to her modern restatement of the master Jean_Auguste_Dominique_Ingres, as displayed in her work Group of Four Nudes, 1925. A portrait might take three weeks of work, allowing for the nuisance of dealing with a cranky sitter; by 1927-8 de Lempicka could charge 50,000 French francs per portrait (a sum equal to about USD 2,000 then-perhaps ten times as much today). Through Castelbarco she was introduced to Italy's great man of letters and notorious lover, Gabriele d'Annunzio. She visited the poet twice at his Lake Garda villa, seeking to paint his portrait; he in turn was set on seduction. After these attempts to secure the commission, she left angered while both she and d'Annunzio remained unsatisfied.

In 1929, she painted her iconic work Auto-Portrait (Tamara in the Green Bugatti) for the cover of the German fashion magazine Die Dame. As summed up by the magazine Auto-Journal in 1974, "the self-portrait of Tamara de Lempicka is a real image of the independent woman who asserts herself. Her hands are gloved, she is helmeted, and inaccessible; a cold and disturbing beauty [through which] pierces a formidable being--this woman is free!" De Lempicka won her first major award in 1927, first prize at the Exposition Internationale de Beaux Arts in Bordeaux, France for her portrait of Kizette on the Balcony.

During the Roaring 20s Paris, Tamara de Lempicka was part of the bohemian life: she knew Pablo Picasso, Jean Cocteau, and Andre Gide. Famous for her libido, she was bisexual, and her affairs with both men and women were carried out in ways that were scandalous at the time. She often used formal and narrative elements in her portraits and nude studies to produce overpowering effects of desire and seduction. In the 1920s she became closely associated with lesbian and bisexual women in writing and artistic circles, such as Violet Trefusis, Vita Sackville-West, and Colette. She also became involved with Suzy Solidor, a night club singer at Boite de Nuit, whom she later painted. Her husband eventually tired of their arrangement; he abandoned her in 1927, and they were divorced in 1928.


Women Bathing, 1929
Obsessed with her work and her social life, de Lempicka neglected more than her husband; she rarely saw her daughter. When Kizette was not away at boarding school (France or England), the girl was often with her grandmother Malvina. When de Lempicka informed her mother and daughter that she would not be returning from America for Christmas in 1929, Malvina was so angry that she burned de Lempicka's enormous collection of designer hats; Kizette watched them burn, one by one.

Kizette was neglected, but also immortalized. De Lempicka painted her only child repeatedly, leaving a striking portrait series: Kizette in Pink, 1926; Kizette on the Balcony, 1927; Kizette Sleeping, 1934; Portrait of Baroness Kizette, 1954-5, etc. In other paintings, the women depicted tend to resemble Kizette.

In 1928, her long time patron the Baron Raoul Kuffner visited her studio and commissioned her to paint his mistress. De Lempicka finished the portrait, then took the mistress' place in the Baron's life. She travelled to the United States for the first time in 1929, to paint a commissioned portrait for Rufus Bush and to arrange a show of her work at the Carnegie Institute in Pittsburgh. The show went well but the money she earned was lost when the bank she used collapsed following the Crash of 29.

De Lempicka continued both her heavy workload and her frenetic social life through the next decade. The Great Depression had little effect on her; in the early 1930s she was painting King Alfonso XIII of Spain and Queen Elizabeth of Greece. Museums began to collect her works. In 1933 she traveled to Chicago where she worked with Georgia O'Keeffe, Santiago Martinez Delgado and Willem de Kooning. Her social position was cemented when she married her lover, Baron Kuffner, in 1933 (his wife had died the year before). The Baron took her out of her quasi-bohemian life and finally secured her place in high society again, with a title to boot. She repaid him by convincing him to sell many of his estates in Eastern Europe and move his money to Switzerland. She saw the coming of World War II from a long way off, much sooner than most of her contemporaries. She did make a few concessions to the changing times as the decade passed; her art featured a few refugees and common people, and even a Christian saint or two, as well as the usual aristocrats and cold nudes.


Amethyst, 1946
In the summer of 1939, Tamara and the Baron started an "extended vacation" in the United States. She immediately arranged for a show of her work in New York, though the Baron and Baroness chose to settle in Beverly Hills, California, living in the former residence of Hollywood director King Vidor. She became 'the baroness with a brush' and a favorite artist of Hollywood stars. She cultivated a Garboesque manner. The Baroness would visit the Hollywood stars on their studio sets, such as Tyrone Power, Walter Pidgeon, and George Sanders and they would come to her studio to see her at work. She did war relief work, like many others at the time; and she managed to get Kizette out of Nazi-occupied Paris, via Lisbon, in 1941. Some of her paintings of this time had a Salvador Dali quality, as displayed in Key and Hand, 1941. In 1943, the couple relocated to New York City. Even though she continued to live in style, socializing continuously, her popularity as a society painter had diminished greatly. They traveled to Europe frequently to visit fashionable spas and so that the Baron could attend to Hungarian refugee work. For a while, she continued to paint in her trademark style-but she expanded her subject matter, painted still lifes, and even some abstracts. Yet eventually she adopted a new style, using palette knife instead of brushes. Her new work was not well-received when she exhibited in 1962 at the Iolas Gallery. De Lempicka determined never to show her work again, and retired from active life as a professional artist.

Insofar as she still painted at all, De Lempicka sometimes reworked earlier pieces in her new style. The crisp and direct Amethyste (1946), for example, became the pink and fuzzy Girl with Guitar (1963).

After Baron Kuffner's death from a heart attack in 1962, she sold most of her possessions and made three around-the-world trips by ship. Finally De Lempicka moved to Houston, Texas to be with Kizette and her family. (Kizette had married a man named Harold Foxhall, who was then chief geologist for the Dow Chemical Company; they had two daughters.) There she began her difficult and disagreeable later years. Kizette served as Tamara's business manager, social secretary, and factotum, and suffered under her mother's controlling domination and petulant behavior. Tamara complained that not only were the paints and other artists' materials now inferior to the "old days" but that people in the 1970's lacked the special qualities and "breeding" that inspired her art. The artistry and craftsmanship of her glory days were unrecoverable. In 1978 Tamara moved to Cuernavaca, Mexico, to live among an aging international set and some of the younger aristocrats. After Kizette's husband died of cancer, she attended her mother for three months until Tamara died in her sleep on March 19, 1980. Her ashes were scattered over the volcano Popocatepetl by Count Giovanni Agusta.

De Lempicka lived long enough, however, for the wheel of fashion to turn a full circle: before she died a new generation discovered her art and greeted it with enthusiasm. A 1973 retrospective drew positive responses. At the time of her death, her early Art Deco paintings were being shown and purchased once again. A stage play inspired in part by her life ("Tamara") ran for two years in Los Angeles (1984-1986) and subsequently at the Seventh Regiment Armory in New York City (see Dec. 3, 1987 NY Times for a review). In 2005, actress and artist Kara Wilson performed Deco Diva, a one-woman stage play based on de Lempicka's life. Another homage to Tamara is seen in TV series Buffy the Vampire Slayer. In 5th season, the arch-villain Glory has a copy of Tamara de Lempicka's Irene and her sisters a.k.a. Four nudes in her living room. (From Wikipedia)
http://www.tamara-de-lempicka.org/the-complete-works.html 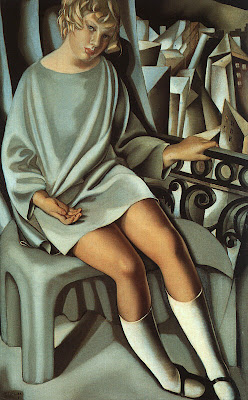 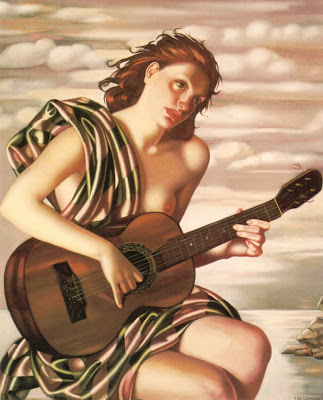 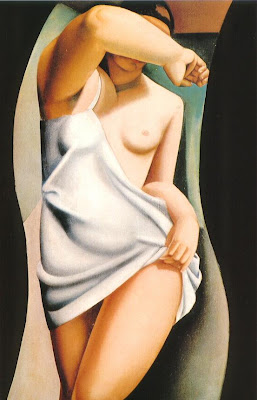 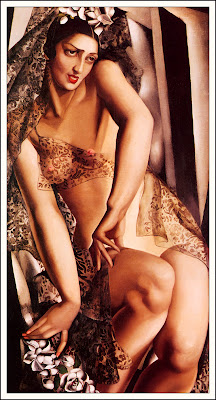 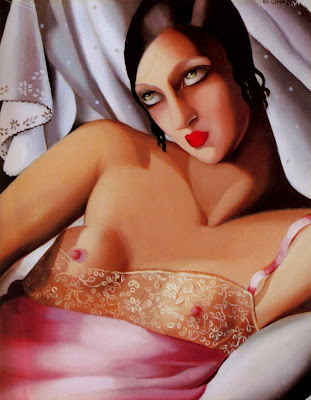 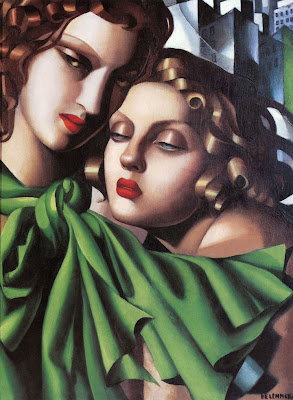 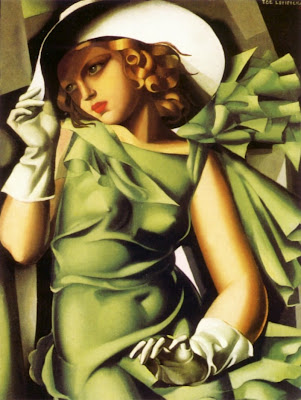 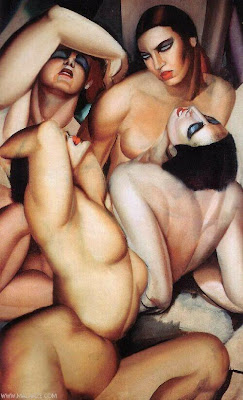 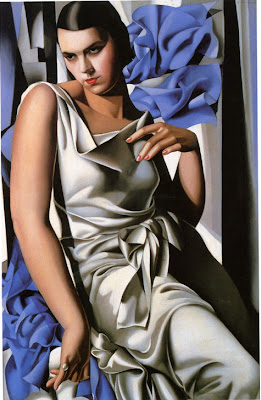