We are accustomed to seeing works of European art that have been heavily influenced by art emanating from non-European cultures. This tendency began in fact long before Modernism, though it has been regularly associated with Modernist initiatives. As European traders made new contacts throughout the globe, they borrowed, though often only in a rather sporadic way, from the art of the regions they contacted. A striking example of this, in the 18th century, was the fashion for what was called chinoiserie, which became a component of the Rococo style in decoration and architecture. A famous example is Frederick the Great’s Chinese Teahouse, in the grounds of his palace at Potsdam, with its almost life-size Chinese figures.

Later, in the second half of the 19th century, Japanese art became a kind of cult in progressive artistic circles in Europe, thanks very largely to the sudden availability of Japanese woodcuts, after the Japanese ports were forced open by Commodore Perry’s two naval expeditions to Japan (1852-4). The radical inventiveness of Japanese figurative and landscape compositions had profound impact on aspects of Impressionist art, and, after this, on the work of Toulouse-Lautrec. This impulse was followed in due course by the borrowings from tribal African art made by the Cubists, chief among them Picasso. As is well known, the heads of the figures in his masterpiece Les Demoiselles d’Avignon are adapted from Dogon ceremonial masks.

In general these borrowings were until very recently regarded by European art historians as examples of the innate superiority of European culture – indications of its flexibility, taste for innovation and ability to absorb any new aesthetic phenomena that it encountered. Reciprocal impulses in art – for example the Company School watercolours made by Indian artists for European officials and merchants resident in their country, or the Canton School paintings and drawings produced as souvenirs for Europeans who made the long voyage to China – were dismissed as being obviously inferior to any equivalent European product.

Only very rarely did a European artist succeed in integrating himself fully with a non-European milieu. Almost the only example I can immediately think of is the Italian Jesuit Giuseppe Castiglione (1688-1766), who became a celebrated Chinese style painter, spending most of his life in Beijing. His work was much appreciated by the connoisseur emperor Qian Long.

How then are we to look at this new series of paintings by perhaps the most internationally celebrated of modern Pakistani artists, who for a number of years now has chosen to live and work in London? They are a dialogue with Picasso rather than a direct homage to Picasso, and it is interesting to think how they came about.

What one has to consider here is both the generation that Naqsh belongs to, and his intellectual background. He was born in Kairana, Utter Pradesh, a city that has a deep-rooted tradition of Indian classical music. He belonged to a Muslim family and, like so many Indian Muslims at the time of Partition, he was forced to emigrate to what became Pakistan. It was in Pakistan that he received his basic artistic education, combining a schooling in Western artistic methods with one in techniques that would have been familiar at the Mughal court, before the arrival of the British.

The new generation of artists in Pakistan, to which he then belonged, was, following World War II, thrust into a new aesthetic world by the colour illustrated art magazines and books that were then becoming widely available internationally. Essentially this meant that the achievements of the European and American Modern Movements hit them all at once, rather than arriving in historical sequence. Picasso was not a remote, venerated elder. He was someone with whom they could imagine having a conversation – a conversation on equal terms.

This is essentially what we see happening in the paintings shown here, though they have of course been made much later in Jamil Naqsh’s career. The bull or man-bull figure that was so intimately part of Picasso’s mythological world is present, but so too are images of women wearing Islamic headscarves, or even the burqa. There is a deliberate confrontation, not only of the quintessentially male with the quintessentially female, but also of two different cultural universes. In these paintings Jamil Naqsh is staking a claim to be seen, not as an artist confined to one culture, but as someone who has the right – in fact the duty – to address, using a universal visual language, an equally universal audience

In Pakistan, Jamil Naqsh is probably best known for his paintings featuring pigeons, or pigeons with beautiful women. These refer to a very particular aspect of his own past, as well as to specific aspects of Pakistani culture. When Naqsh was forced to leave Kairana, in Uttar Pradesh, where he was born, amid the violent turmoil of Partition, he was in his teens. After the turmoil subsided, he returned, to find that a familiar domestic world, which had seemed completely stable, to all intents and purposes immutable, had vanished. During his childhood, the pigeons that flew in and out of the windows of the family house were personifications of domestic calm and ease. For Naqsh, the painted images are emotionally charged – they are symbols of a way of life that has been completely lost, and can never be recovered, except through the magic of art.

When he combines them with images of beautiful young women, they are symbolic in another sense. Naqsh is widely read, both in English and in Urdu. In Urdu one of the writers who has meant most to him is the poet Mirza Ghalib (1797-1869), who is considered to be the last great poet of the Mughal era. Ghalib is particularly celebrated for his ghazals, short poems following a strict structure that are celebrations, usually, of unrequited, idealized love. To give some idea of what these poems are like, here is an example in English, written by myself:

AN ENGLISH GHAZAL For Jamil Naqsh

Tonight a pigeon enters her window, The night is hot, therefore an open window.

What message arrived With those wings through the window?
A flutter of snow In the darkness of the window.

Many of Jamil Naqsh’s paintings are best thought of as visual ghazals, expressions of a particular state of romantic feeling. Their general tone, like that of the paintings with pigeons only, is one of nostalgia and longing, but the longing is now also infused by eroticism.

This year sees a major celebration of the English Pre-Raphaelite Movement, at Tate Britain. The Pre-Raphaelites were the parents of the European Symbolists who, in turn were the forefathers of many of the most important characteristic of Modernism. In fact, it is possible to trace a direct line of descent from Rossetti and Burne-Jones to the Picasso of the Blue Period. It is easy to see how some of Jamil Naqsh’s paintings of pigeons and girls are linked to this line of descent. 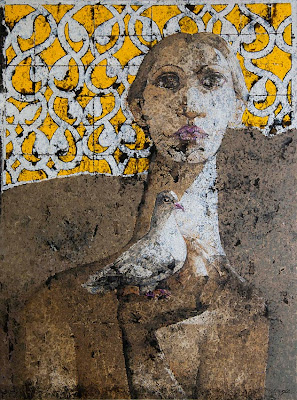 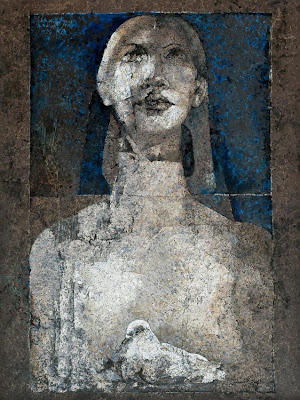 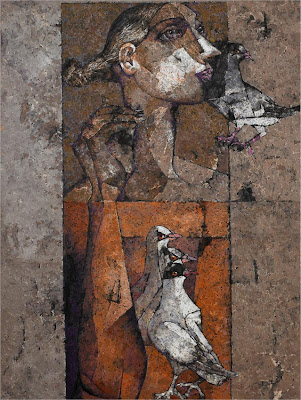 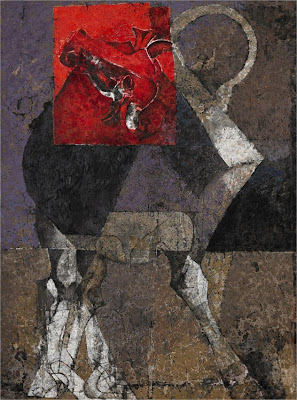 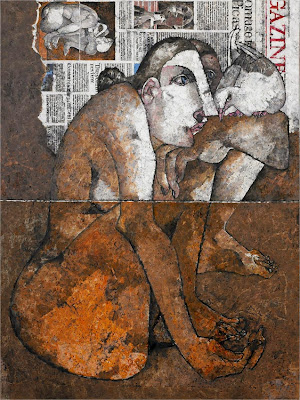 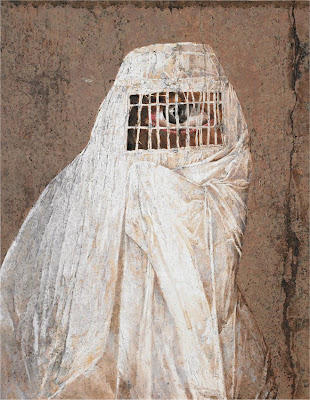 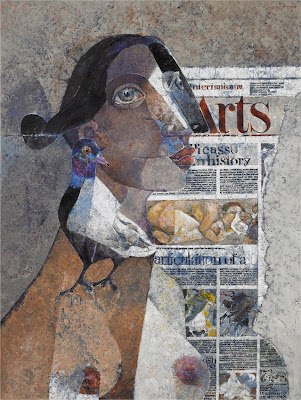 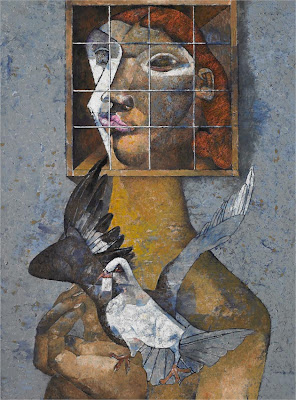 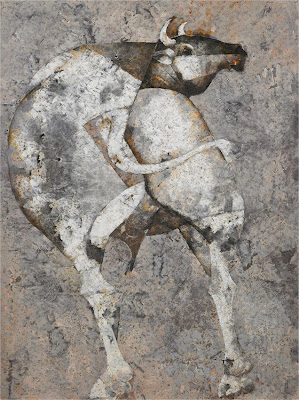 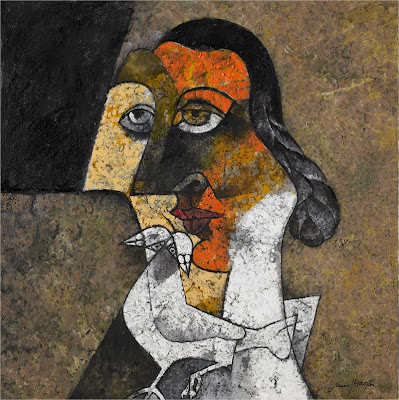 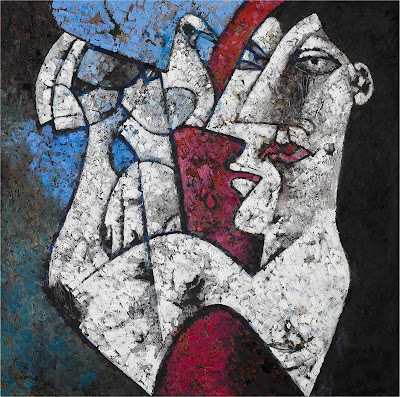 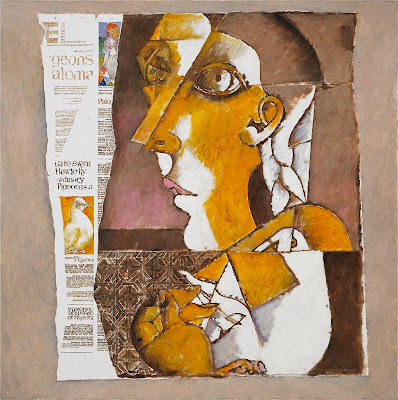 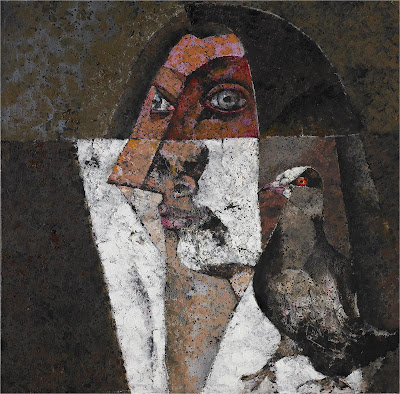 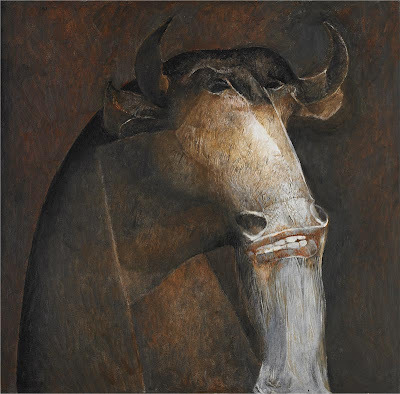 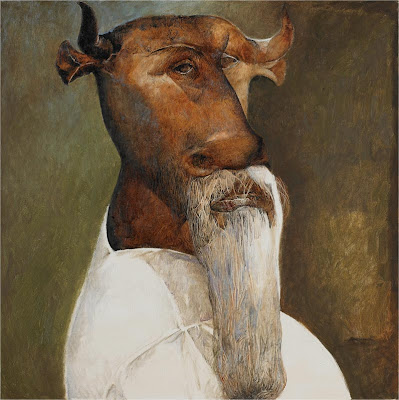 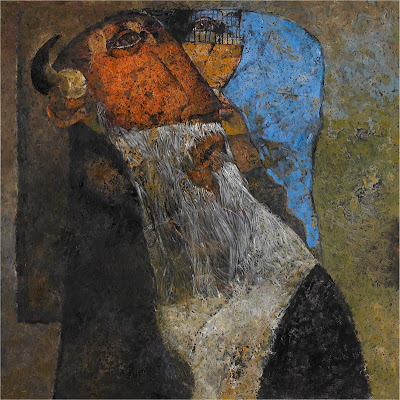 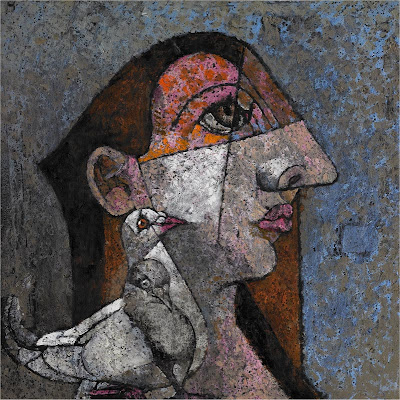 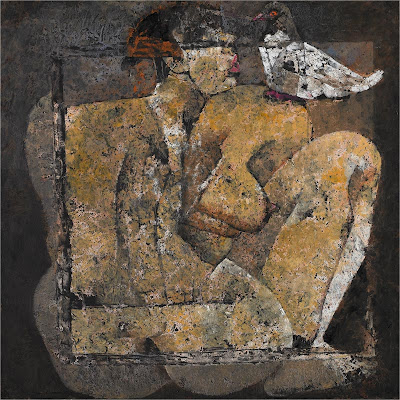 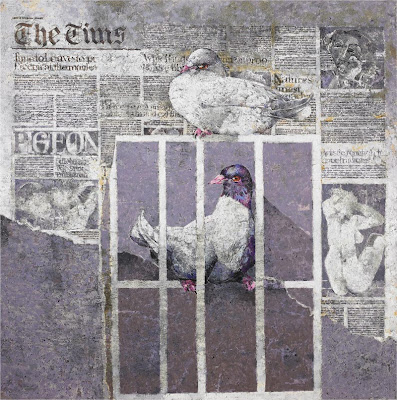 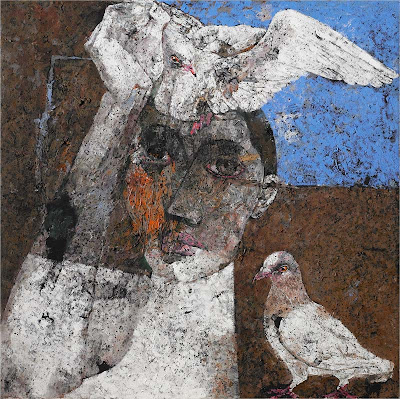 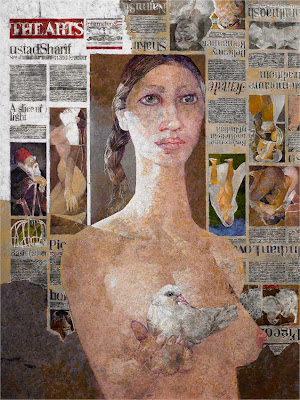 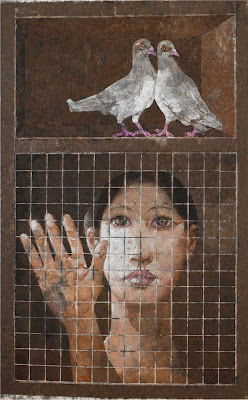 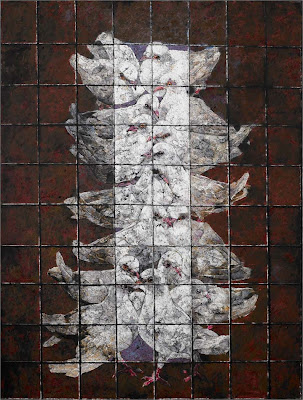 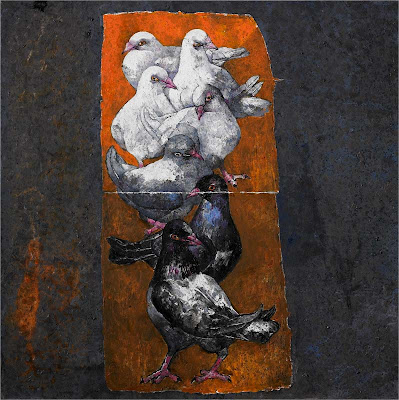 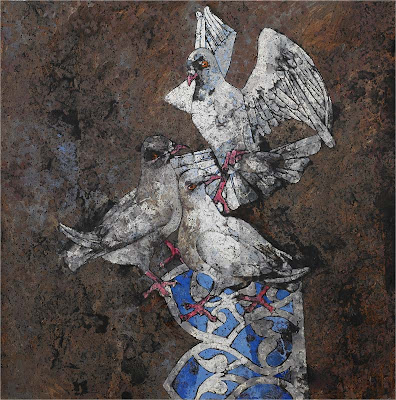 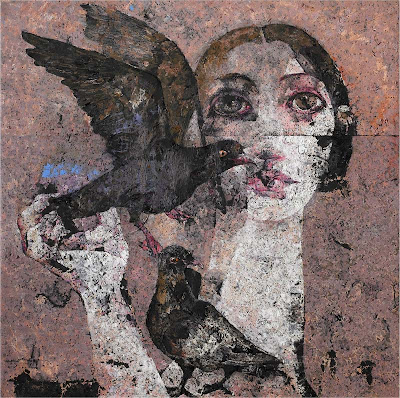 It is equally easy to see how these works, more surprisingly perhaps, are linked to states of feeling that play an important part in the English poetic tradition. The British Raj lurks mysteriously in the background of some of these works. It is perhaps worth remembering that Rudyard Kipling, the laureate of the Raj, born in 1864, just before the death of Mirza Ghalib, was the nephew by marriage of none other than Edward Burne-Jones.Edward Lucie-Smith Art Historian, Author and Critic
http://www.albemarlegallery.com/artists/jamil-naqsh
http://jamilnaqsh.co.uk/
http://www.studioglass.co.uk/sgg2004/jamil-naqsh/exhibition.htm