HAZEL NAGL is a graduate of Glasgow School of Art, where she studied Drawing and Painting.  Following graduation, she lived and worked at the Art School’s workshop at Culzean Castle where she developed an interest in landscape painting in response to the varied and dramatic surroundings.  She is widely known for her still life and landscape paintings, her preoccupations being imparting a sense of space and light and an expressive impulse.  She handles watercolour superbly, layering veils of translucent colour through her work.   In 1988 she was elected to the RSW and to the RGI in 2000.  She has won a number of awards including the RGI - Sir Alexander Stone Priz, RGI - Mabel Mackinlay Award, RGI - Eastwood Publications Award, SAAC Prize, PAI Prize, 1st Prize Laing Competition.
She exhibits widely and has work in a number of Public Collections including The Fleming Collection, The Royal Bank of Scotland, Glasgow University, Common Market Enterprises, Combined Capital and Scottish & Newcastle Breweries 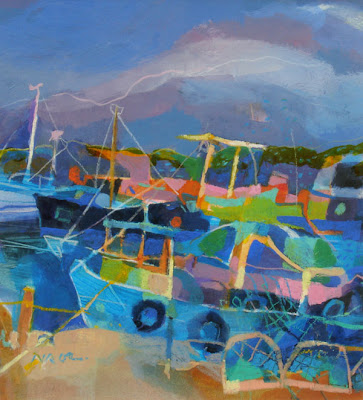