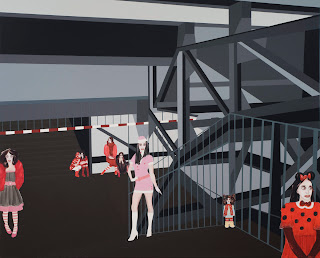 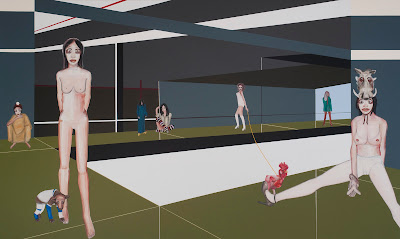 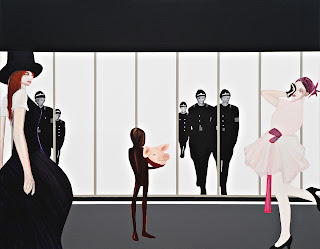 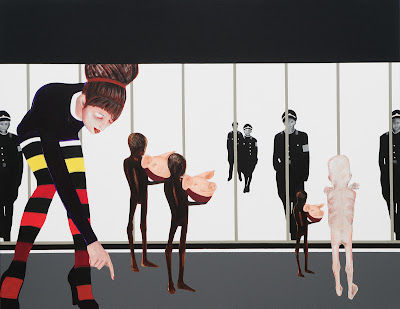 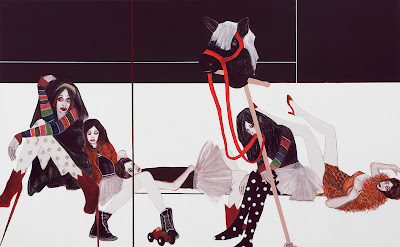 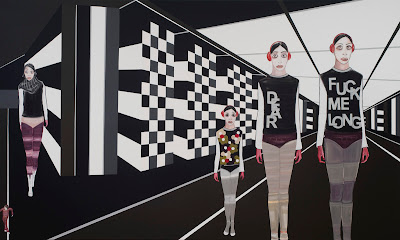 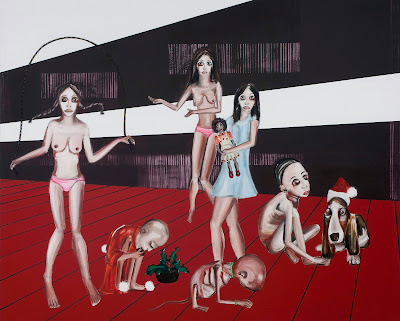 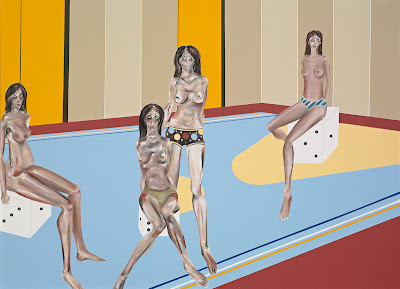 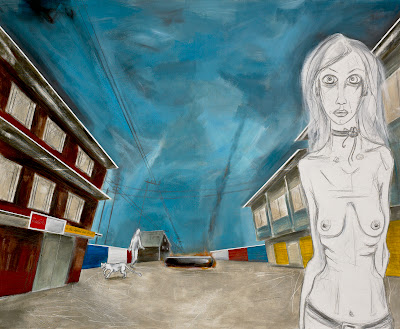 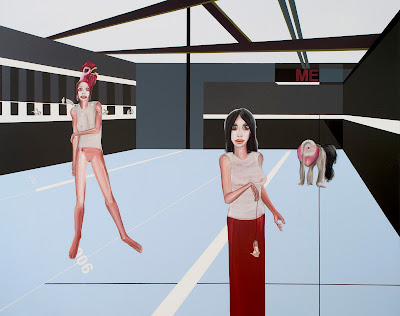 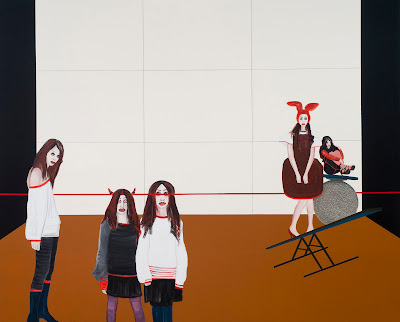 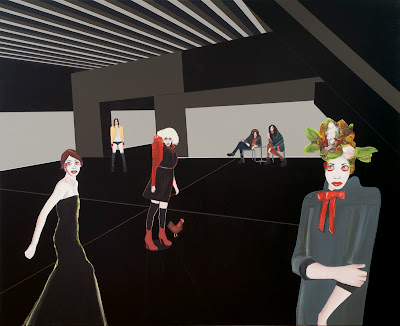 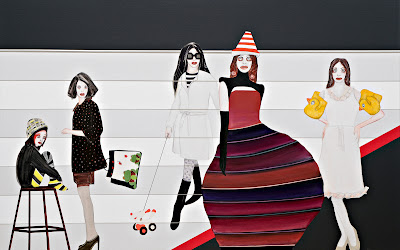 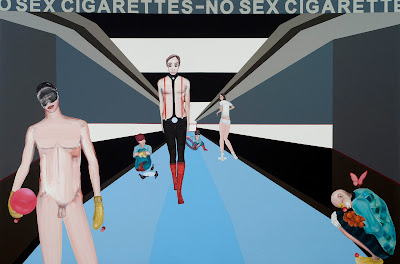 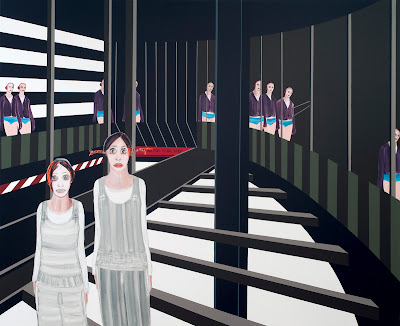 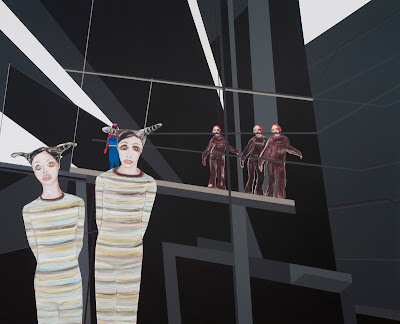 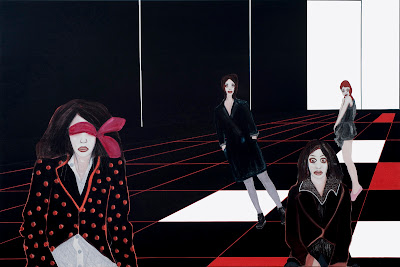 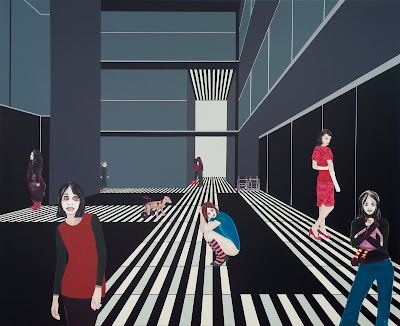 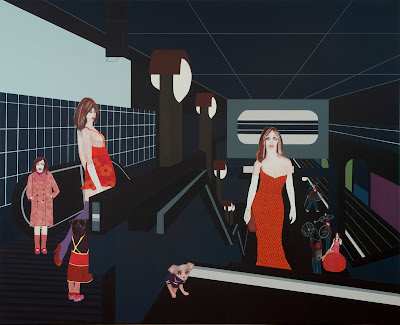 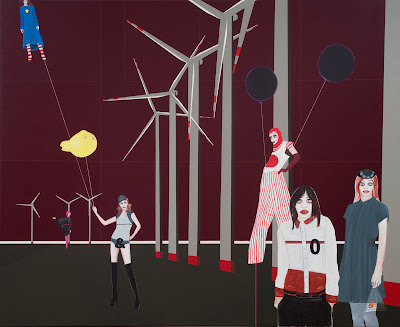 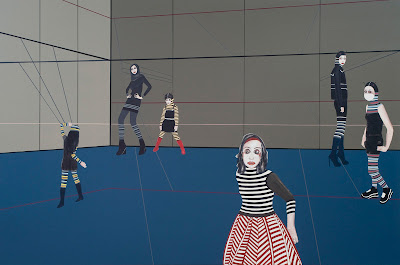 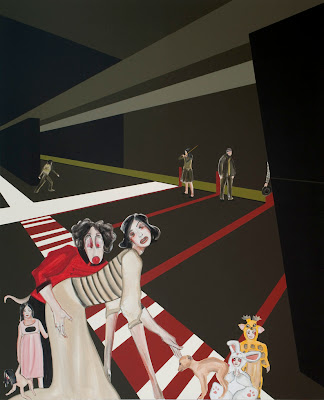 Influence Isabelle Lutz's pictures, which at first were expressive and gestural, have gradually become more restrained: an abstract world with emphasized perspectives, the sign of a disembodied urban civilisation, has replaced the early primitivism. Female figures go around looking dumbfounded, calling the viewer to witness the strangeness of the situations experienced in a colourful, geometrical environment. They are usually nude and exhibit their fragility in scenes that a quick glance would have no trouble qualifying as incongruous. In the absence of narration, the paintings have an enigmatic dimension and become sorts of puzzles. They translate a relationship to the world that abandons the obvious to seek associations of ideas, telescoping images and the saturation of signifieds. The ambiguity stems from the multiplication of visual and semantic stimuli, in the image of the playful and coercive, flashy and disquieting spaces, because it is impossible to settle on a single interpretation here. Through this reversibility Isabelle Lutz seeks to play with the codes of pop culture, which has replaced absolutist dreams with a deep relativism whose dominant form is still economic pragmatism. She immerses us into the heart of a postmodern world stripped of exteriority. She exposes the ambivalence of contemporary society, where the dividing line between alienation and emancipation has become blurry. That is the case of the women described (Nana, Lucy and the others), who can be perceived as full- fledged subjects while offering themselves as eroticised objects to the male eye. Isabelle Lutz’s paintings do not totally eschew seduction but nevertheless remain unsettling in the way they make a sharp value judgement without denouncing it in the name of an absolute truth. Her works’ paradoxical irony is that between visual balance and emotional tension, they strongly underscore that the period is acid, that charm and violence mingle as never before. She does not claim to be objective in the least. On the contrary, far from taking a heroic stance, she asserts a subjectivity (and the cultural conditioning that goes with it) at odds with the complexity of Europe’s recent social and political development without, however, abandoning a critical perspective. [in the slightly acid world - press release 09/2009]
http://19158.portfolio.artlimited.net/
http://www.isabellelutz.com
http://www.terminartors.com/artworkprofile/Lutz_Isabelle-Waiting_for_my_dog