Michael Parks - Magical Realist. What is unusual about Michael Parkes is that in his images metaphysical and spiritual elements are joined into reality. His work evokes a mysterious atmosphere, which can often only be deciphered with the help of ancient mythology and eastern philosophy.

In the fantasy world of Parkes, the laws of earthly reality are abolished, and space and time enter into their own motionless communion. It is tempting to speak of a dream world with Parkes, if it were not for the fact that the ‘dream world’ of Michael Parkes surpasses all of our dreams in audacity, freedom and intensity. In short, in Michael Parkes, the figurative art of our age has found a new, fascinating and extremely authentic exponent.

As human beings, we limit our sense of perception to what is generally comfortable and present in everyday life. In limiting our perceptions to suit our individuality, we miss the vastness of other perceptions and the doors they represent. Though we have been conditioned to perceive nothing except our own world, this does not mean we cannot enter other realms. - Michael Parkes

Born in 1944, Michael Parkes studied graphic art and painting at the University of Kansas and then traveled for three years through Asia and Europe. In 1975, Michael Parkes settled in Spain, where he now lives. Throughout his career, numerous international exhibitions underline the importance of Parkes’ work. Michael Parkes is both a uniquely talented painter and master of the art of original stone lithography.

Michael Parkes is the world’s leading Magical Realist.  He is a painter, a sculptor, and a stone lithographer.  His more than 30 years of success as a fine artist stand out in the art world, where fewer than 1% of artists ever achieve success in both the primary and secondary markets.  Parkes’ works are collected by celebrities, important private collectors, and museums around the world, and his body of work has stood the test of time.  That being said, Parkes’ continues to create new works, all of which are widely sought after.

Exhibitions:
Michael Parkes has had one-man exhibitions at the Basel Art Fair in Switzerland, Art Chicago, New York Art Expo, Frankfurt Book Fair, Amsterdam Art Fair, Tefaf Art and Antiques Fair Maastricht and is represented by prestigious galleries in Amsterdam, Paris, Denmark, Italy, New York, Los Angeles, the San Francisco Bay Area, and around the United States.  In 2007, Michael was the guest of honor and featured artist in the international show “Venus and the Female Intuition,” exhibited in Denmark and Holland .  Also in 2007, Michael Parkes’ work inspired a contemporary ballet production by Scorpius Dance Theater of Phoenix, where his art came alive in the ballet’s sets and characters.

Place in Art History
John Russell Taylor, art critic for the London Times and art contributor to The New York Times, says:  “Compare [Parkes] with even the best of them, such as Mobius of Theo van den Boogaard, and the difference is immediately apparent.  His technique is more painterly, his imagination much less tied within the confines of narrative.  In fact, narrative is the last thing one thinks of, confronted with one of Parkes’ images.  Parkes, like Alma-Tadema, has developed outstanding skill in the rendering of veined marble and the textures of various fabrics as they cling to or fall from the curves of his remote yet inviting female figures.”

“With Parkes we may be reminded, now of some Victorian, now of Botticelli, now of Tiepolo, now (though much more infrequently) of Goya.  But all of these, though Parkes has undoubtedly observed them, have been absorbed into an entirely modern sensibility.  If we were looking for a twentieth-century stalking horse, we might well look to Surrealists like Dali and Magritte.”

“There is one important distinction, however.  In Surrealism, there is always a sense of stress and [the] blues beneath the smooth and soigné surface.  Maybe there was a touch of that in Parkes at the beginning of his latest phase: the clowns and dwarfs could seem threatening, not all the animals had their claws safely sheathed.  But Parkes always seemed to be at least hankering after calm and tranquility, and in his latest works he has achieved it.” 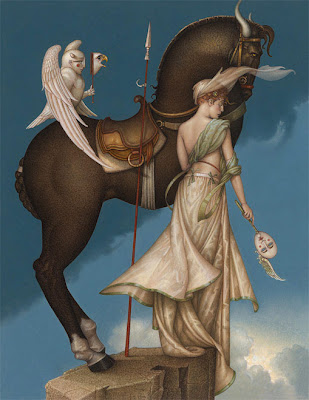 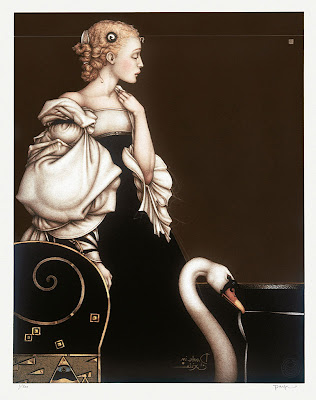 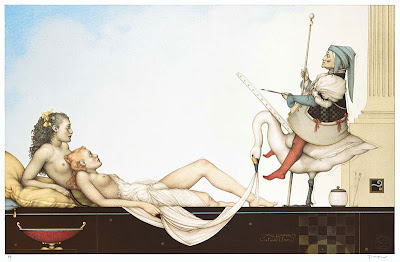 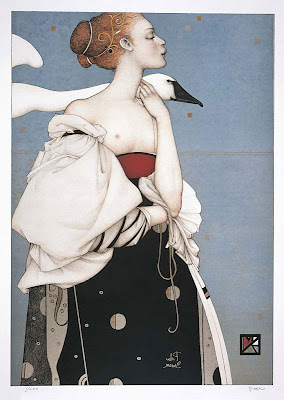 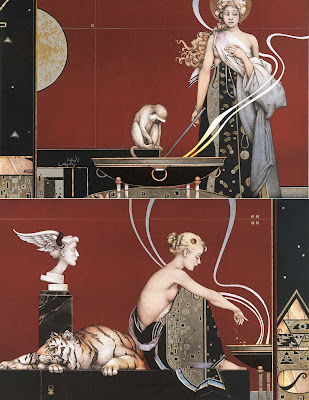 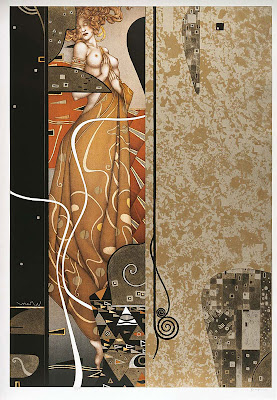 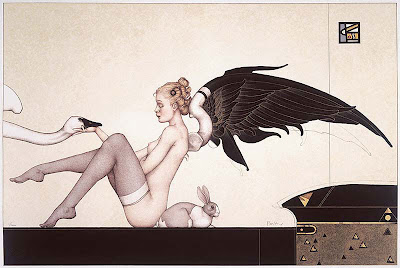 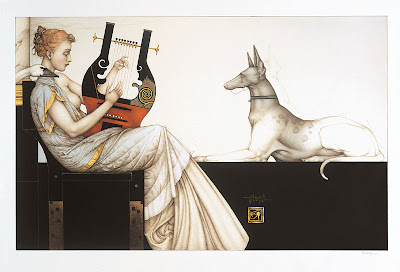 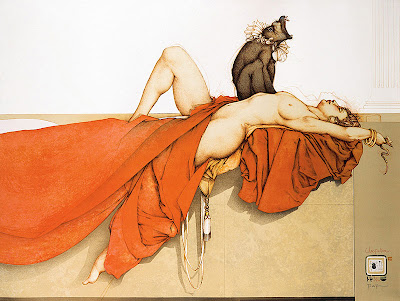 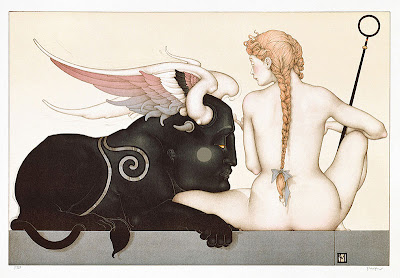 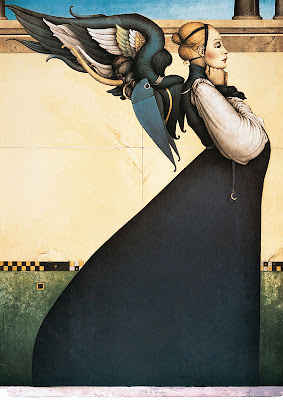 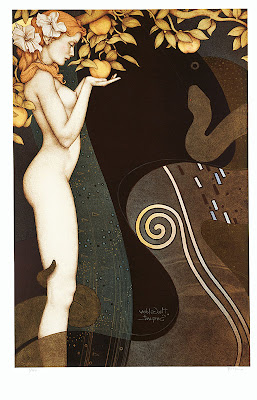 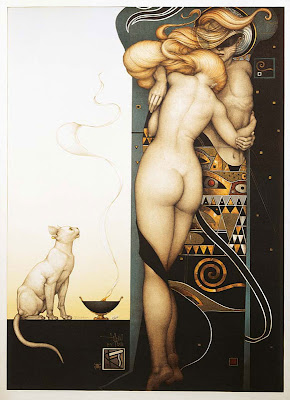 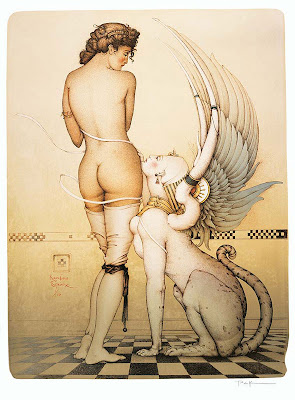 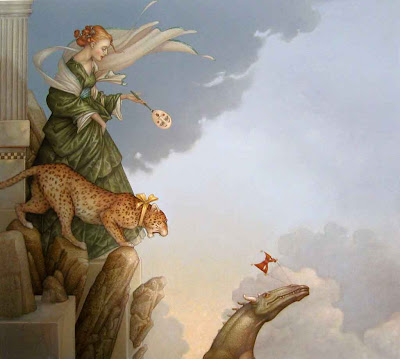 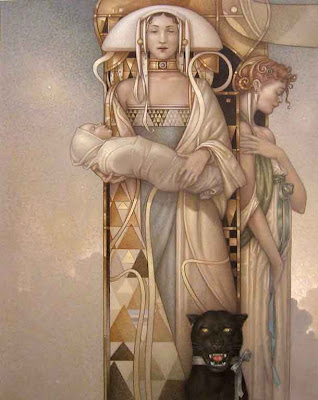 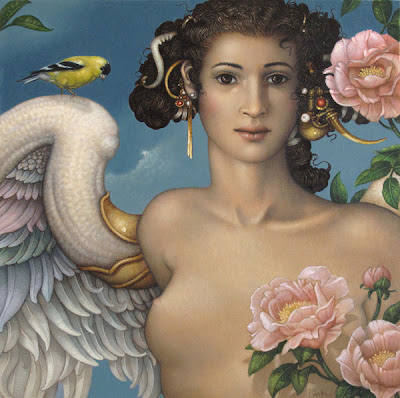 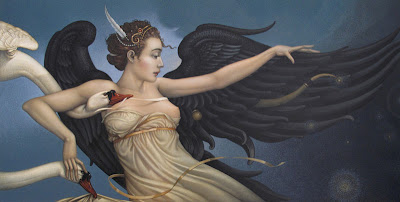 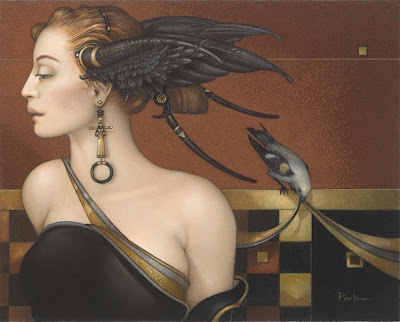 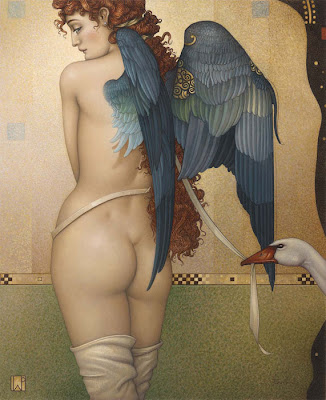 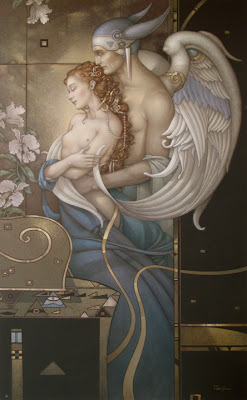 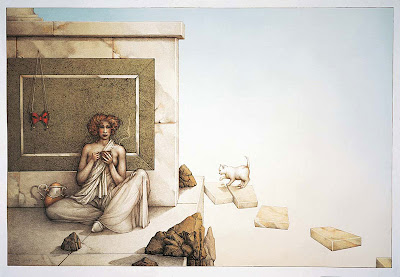 Parkes could draw even before he could read and write.  He was an only child, raised in Canalou , Missouri , a typical American Midwest town in the fifties.  He attended art school where he met the woman, artist and musician to whom he remains married more than three decades later, Maria Sedoff.  Parkes taught college level Art History as the young couple made their way in the Vietnam era.  Parkes has been a serious and lifelong student of spirituality and esoterica. Together in the 1970's, Michael and Maria set off on a spiritual journey where they found excellent teachers and a lifelong passion for India .  Returning to Spain soon after their only daughter was born, Michael and Maria worked together to form a financially stable venture in art, beginning with humbly making and selling leather belts to tourists to achieving the internationally prestigious recognition as a master that Parkes enjoys today.  Parkes remains humble and as much like your favorite neighbor as the sage weaver of myth and dreams whom we know through his art.  Ultimately forming a publishing company to independently represent his art work, Michael and Maria now live and work in Spain  Swan King International is now Parkes’ exclusive publisher and distributor of his creative works.
http://theworldofmichaelparkes.com