The showing of drawings and paintings by Richard Wilt, now at the Slusser Gallery of the University of Michigan School of Art, is almost certainly the largest display of his work ever to be seen locally.

Although not officially a retrospective, it includes work from 1940 to 1979, and permits more than a glimpse of the stages of development and changing styles of an extremely accomplished and prolific artist.

Professor Wilt came to the U-M in 1947 after experience as an illustrator and designer in New York, and as a teacher in West Virginia (an interesting small part of the current show is a group of his book illustrations).

Over the years his work has undergone many stylistic phases, but not because of changing fashions or movements in the art world; one of the strongest impressions one gains from this exhibition is that Wilt is a painter who has followed his own bent, and that every direction he has taken represents a truly personal interest.

With many painters, the final "style" is simply the result of eliminating those problems which their technical skill is unable to deal with. Wilt moves effortlessly from one set of problems to another, sometimes seeming (my only cavil) to be betrayed only by his own virtuosity.

Born in Pennsylvania, and educated at the Carnegie Institute of Technology, Wilt describes himself as "depression-trained." The important American painters during his student days were men like Grant Wood and John Stewart Currie, regionalists with a strong leaning toward illustration.

In many ways Wilt retains traces of the influence of the Thirties, but he rapidly grew beyond mere illustration. In much of his early work there is a relationship to the social comment painters of the period, particularly to Ben Shahn and Anton Refregier.

But there is about Wilt's paintings an exuberance altogether lacking in the work of the Thirties, a greater emphasis on color, and a special delight in intricacies of surface.

The range of subject is astonishing: from figure pieces to portraits, through landscapes and social commentary, to crucifixions and moonscapes inspired by holography. Pennsylvania floods, farms and barnyards, the Chinese revolution, the tropical foliage of Antigua -- all have moved him to visual expression.

He deals with all these themes (and many more), altering his approach and treatment in inventive ways. But the consistent elements are the hard, clean lines of his drawing and a sure sense of arrangement: his figures seem to be acting out scenes which compose themselves; the Holstein cows in his barnyard series stand together so that their markings form the proper abstract shapes. To say this is to recognize a skill which makes composition seem easy.

This talent appears to special advantage in the 1948 series of paintings of children at play: Hand to Hand, or Hop Scotch, in which the subjects deadly serious in their games are treated with an abstract gaiety on the part of the artist.

In later work, Wilt invites accidental effects by pouring, spraying, or the use of sponges, but these are as carefully controlled as the drawing with which they are integrated, as in the large Spring Swim, or Weeping Willow and Girl. In Antique Head and Fallen Warrior, the subjects are developed out of a surface broken as by age, fire, or weather.

Wilt's technical skill is particularly exempified in Waterfall, a canvas of 1954 in which he demonstrates an almost Oriental pleasure in precise pattern, rhythmic line, and intricate detail, with figures and ground merging and interlocking.
Richard Wilt's work has been seen and honored in major cities across the country, and according to the catalogue, this is his sixty-third one-man show. By it the School of Art salutes one of its most dedicated painters and teachers. He has crowded the huge Slusser Gallery with color and life; it is a display which should not be missed.
This review of Richard Wilt's exhibit at The University of Michigan School of Art's Paul Slusser Gallery, written by Robert Iglehart, art critic and former chair of the Art Department at the University of Michigan, appeared in the Ann Arbor News on Sunday, September 2, 1979. 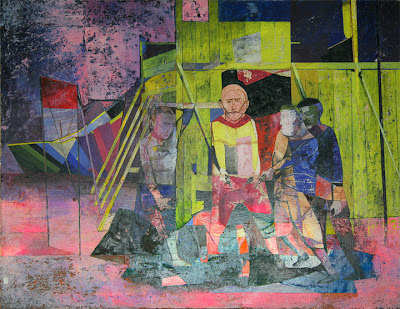 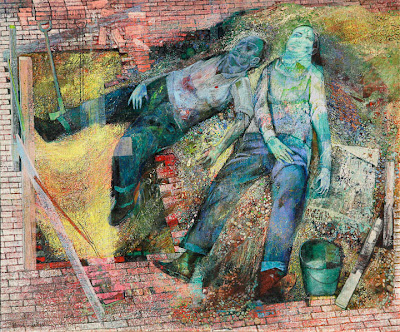 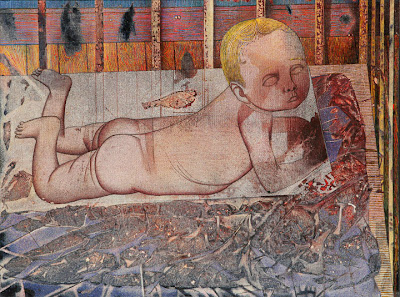 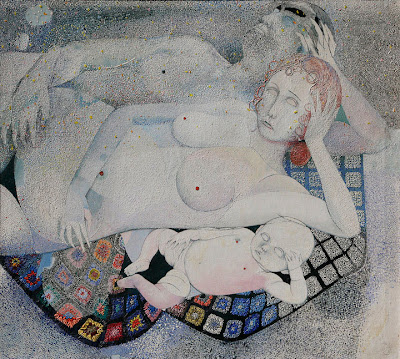 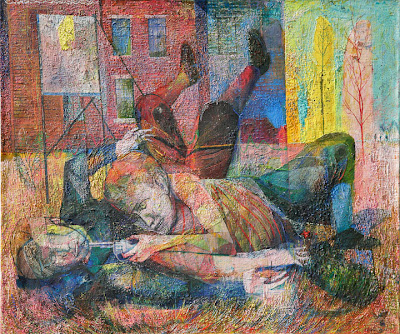 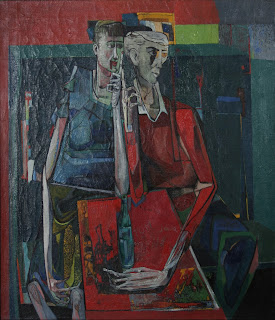 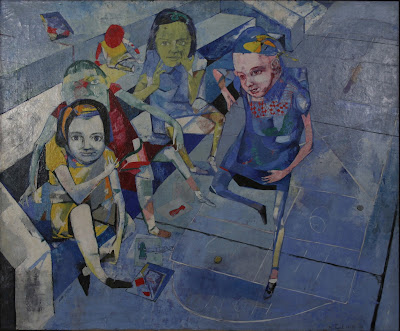 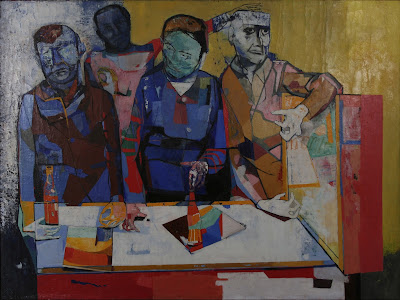 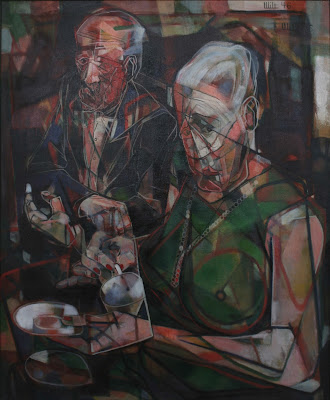